It is time to rethink how we grow, share and consume our food.

If done right, agriculture, forestry and fisheries can provide nutritious food for all and generate decent incomes, while supporting people-centered rural development and protecting the environment.

Right now, our soils, freshwater, oceans, forests and biodiversity are being rapidly degraded. Climate change is putting even more pressure on the resources we depend on, increasing risks associated with disasters such as droughts and floods. Many rural women and men can no longer make ends meet on their land, forcing them to migrate to cities in search of opportunities.

A profound change of the global food and agriculture system is needed if we are to nourish today’s 795 million hungry and the additional 2 billion people expected by 2050.

The food and agriculture sector offers key solutions for development, and is central for hunger and poverty eradication. 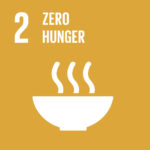 How Your Company Can Advance Goal 2