Clean, accessible water for all is an essential part of the world we want to live in. There is sufficient fresh water on the planet to achieve this. But due to bad economics or poor infrastructure, every year millions of people, most of them children, die from diseases associated with inadequate water supply, sanitation and hygiene.

By 2050, at least one in four people is likely to live in a country affected by chronic or recurring shortages of fresh water. 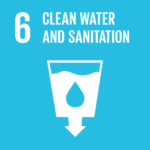 How Your Company Can Advance Goal 6

“Although we take it for granted, sanitation is a physical measure that has probably done more to increase human life span than any kind of drug or surgery.”