Forests cover 30 per cent of the Earth’s surface and in addition to providing food security and shelter, forests are key to combating climate change, protecting biodiversity and the homes of the indigenous population. Thirteen million hectares of forests are being lost every year while the persistent degradation of drylands has led to the desertification of 3.6 billion hectares.

Deforestation and desertification – caused by human activities and climate change – pose major challenges to sustainable development and have affected the lives and livelihoods of millions of people in the fight against poverty. Efforts are being made to manage forests and combat desertification. 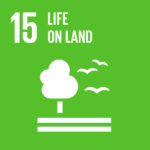 How Your Company Can Advance Goal 15

“We owe it to ourselves and to the next generation to conserve the environment so that we can bequeath our children a sustainable world that benefits all.”