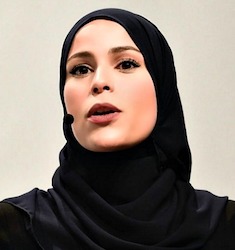 A medical doctor, Alaa Murabit is one of 17 United Nations Sustainable Development Goal Global Advocates, a United Nations High-Level Commissioner for Health Employment and Economic Growth, a TED speaker, the founder of VLW and a MIT Media Lab Director’s Fellow. She was recently named a 2017 Forbes Under 30 for her work in global health policy and a Harvard University Law 2017 “Woman Inspiring Change”. Her TED Talk was named “TED Talk of the Day” and one of four “moving TED Talks to watch right now” by The New York Times.

Nicknamed the “Libyan Doogie Howser” by Jon Stewart, Alaa was driven by her desire to create inclusive processes and institutions and founded VLW at the age of 21. With a strong focus on challenging societal and cultural norms and utilizing traditional and historical role models Alaa champions women’s participation in peace processes and conflict mediation. Her programs, such as the groundbreaking “Noor Campaign” have been replicated internationally.

She currently serves as a trustee for The Malala Fund, International Alert, Keeping Children Safe and is an advisor to ConnectHer. Named The New York Times “International Trust Women Hero 2014”, Alaa is an Ashoka Fellow, Alaa is the youngest Marisa Bellisario International Humanitarian Award recipient, a Newsweek “25 under 25 to watch”, a BBC News “100 Top Woman”, the 2015 SAFE Global Hero and a Virgin Unite Changemaker.