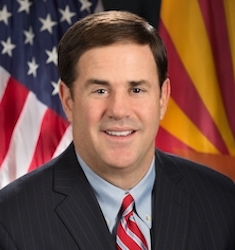 Governor Doug Ducey is the 23rd governor of the state of Arizona.

Elected in 2014 and re-elected in 2018, Governor Ducey has applied his experience from a successful career in business to bring much-needed change to Arizona government.

Upon taking office, the governor inherited a $1 billion budget deficit. He quickly took action and balanced the budget in his first year — without raising taxes.

Committed to investing in public education, in his first year, Governor Ducey led a historic and bipartisan effort to invest $3.5 billion into K-12 schools, injecting more dollars into Arizona’s classrooms. With a focus on teacher pay, the governor also championed the passage of legislation to increase teacher pay 20 percent by 2020.

Today, Arizona’s budget is balanced. Business is thriving. And Arizona is on the rise.

In his second term, Governor Ducey remains committed to making Arizona a land of “Opportunity for All” and has pledged to work every day to make that vision a reality.

Governor Ducey was born in Toledo, Ohio. He moved to Arizona in 1982 to attend Arizona State University, where he graduated with a Bachelor of Science in Finance. He and his wife, Angela, live in Paradise Valley with their three sons, Jack, Joe and Sam.