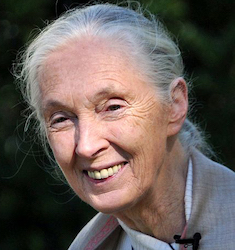 Founder of The Jane Goodall Institute, & UN Messenger of Peace

Jane Goodall was born on April 3, 1934, in London, England. From the earliest childhood, she was fascinated by animals and the Africa she discovered in the storybooks of Tarzan and Dr. Doolittle.

In 1957, she traveled to the Kenyan farm of a friend’s parents and met the famed anthropologist and paleontologist Dr. Louis Leakey. In 1960, at his invitation, she began her landmark study of chimpanzee behavior in what is now Tanzania. Her field research at what was then called Gombe Stream Chimpanzee Reserve – most notably, her discovery that chimpanzees make and use tools – revolutionized the world of primatology and refined the relationship between humans and animals.

In 1977, Dr. Goodall established the Jane Goodall Institute (JGI) to advance her vision and work around the world and for generations to come. JGI continues the work of at Gombe Stream Research Center and is a global leader in the effort to protect chimpanzees and their habitats. It is widely recognized for building on Dr. Goodall’s groundbreaking community-centered approach to conservation and development programs in Africa, and for Roots & Shoots, the global environmental and humanitarian youth program.

Dr. Goodall founded Roots & Shoots in 1991 with a group of Tanzanian students. The youth program connects more than 150,000 young people in nearly 100 countries, equipping them to take action to make the world a better place for people, animals and the environment.

Today, she travels an average 300 days per year, speaking about the threats facing chimpanzees, other environmental crises, and her reasons for hope. In her speeches and books, she emphasizes the interconnectedness of all living things and the collective power of individual action, urging her audiences to recognize their personal responsibility and ability to effect change. “Every individual matters,” she says. “Every individual has a role to play. Every individual makes a difference.”

Her eloquent ability to raise public awareness and understanding has become instrumental in her work to save chimpanzees from extinction. She is the author of numerous books that have engaged an international readership in her life with chimpanzees. Her life and work are the subject of numerous television documentaries, as well as the 2002 film Jane Goodall’s Wild Chimpanzees, and the 2010 documentary, Jane’s Journey. Discovery Channel’s Animal Planet has produced a number of features on Dr. Goodall, including Jane Goodall’s Return to Gombe, Jane Goodall’s State of the Great Ape, When Animals Talk, Jane’s Goodall’s Heroes, and Almost Human.

Dr. Goodall is the recipient of many honors, including the Medal of Tanzania, the National Geographic Society’s Hubbard Medal, Japan’s prestigious Kyoto Prize, the Benjamin Franklin Medal in Life Science, the UNESCO 60th Anniversary Medal, and the Gandhi/King Award for Nonviolence. In April 2002, Secretary General Kofi Annan named Dr. Goodall a United Nations Messenger of Peace. In a 2004 ceremony at Buckingham Palace, she became a Dame Commander of the British Empire. In 2006, she received France’s highest recognition, the Legion of Honor.