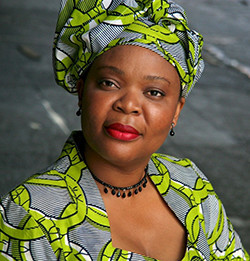 2011 Nobel Peace Laureate Leymah Gbowee is a Liberian peace activist, trained social worker and women’s rights advocate. She is founder and current President of the Gbowee Peace Foundation Africa. She was the founding head of the Liberian Reconciliation Initiative, and was the co-Founder and former Executive Director of Women Peace and Security Network Africa (WIPSEN-A). She is also a founding member and former Liberia Coordinator of Women in Peacebuilding Network/West Africa Network for Peacebuilding (WIPNET/WANEP). Leymah is currently named a Distinguished Activist-in-Residence at Union Theological Seminary. She travels internationally to advocate for human rights and peace & security. Leymah’s leadership of the Women of Liberia Mass Action for Peace – which brought together Christian and Muslim women in a nonviolent movement that played a pivotal role in ending Liberia’s civil war in 2003 – is chronicled in her memoir, Mighty Be Our Powers, and in the award-winning documentary, Pray the Devil Back to Hell. Leymah is a highly sought-after speaker for women’s leadership conferences, as well as business, religious, education, peace and security gatherings. Her 2012 TED Talk has been viewed by nearly 1 million people. She is a frequent guest on major television networks and recently profiled on the New York Times Op-Docs series by filmmaker Errol Morris who called her “a modern day Joan of Arc.” For a full list of awards and recognitions and an expanded bio, please visit peaceisloud.org.