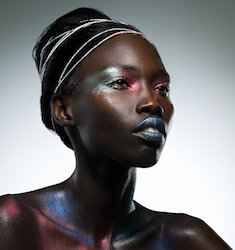 Since she fled South Sudan as a refugee 18 years ago, Mari Malek, aka DJ Stiletto, has become a successful Model/DJ and Actress in New York City. She is also the founder of “Stand For Education,” a non- profit organization dedicated to empowering girls and providing access to education for underprivileged children. When Malek first escaped South Sudan with her mother and siblings, they spent four years in Egypt where they applied for asylum and were granted refugee status. Mari and her family then moved to Newark, New Jersey before they found their relatives and relocated to San Diego, California. One day on a walk to school, Malek was approached by a modeling scout, and in 2006, Malek moved to New York to pursue a career in the field. She now uses her status as a platform to bring light to an often-ignored plight, and helps to inspire and introduce opportunities to South Sudanese women and children whose lives have been torn apart by the violence and inhumanity of war.