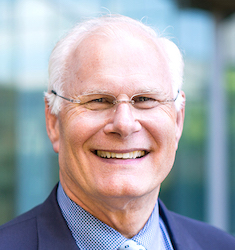 Mark R. Laret has been chief executive officer of the University of California, San Francisco (UCSF) Medical Center, including UCSF Benioff Children’s Hospital, since April 2000. One of the most distinguished health care institutions in the world, UCSF Medical Center is consistently ranked by U.S. News & World Report as one of the top 10 hospitals in the nation and the best in Northern California.

Laret is a 30-year veteran of health care management and a national leader in health care initiatives and reform. He represents the interests of major academic medical centers before Congressional and Administration officials and federal agencies on issues of quality, safety and financing of medical care; innovations in health care delivery; access for the underserved; and the training of medical residents.

Prior to joining UCSF, Laret served at UCLA Medical Center from 1980 to 1995 in a variety of leadership positions, including medical center deputy director and chief executive officer of the 900-physician UCLA Medical Group. From 1995 to 2000, he was CEO of UC Irvine Medical Center, where he led a business turnaround that resulted in improvements in quality of care, patient satisfaction and financial performance.

Under his leadership, UCSF Medical Center reversed what had been a $60 million annual loss in 2000 and within five years produced a $70 million annual gain. Strong financial performance has enabled the self-supporting, nonprofit medical center to pursue expansion and modernization of its facilities and equipment and make advances in quality of care, patient safety and patient satisfaction.

On the local and state level, Laret is on the board of trustees of the California Hospital Association and is past chair of the Hospital Council of Northern and Central California. He co-chairs the San Francisco African American Health Disparity Project, working to improve the health status of African Americans and their access to care.

Laret’s volunteer service includes membership on the board of the international charity Mercy Ships, which delivers medical care on hospital ships to indigent communities in Africa. He chaired corporate fundraising drives in San Francisco for the Juvenile Diabetes Research Foundation and American Heart Association.

He is a member of the board of directors of Varian Medical Systems Inc. in Palo Alto and Nuance Communications in Boston, Massachusetts.

Laret earned a bachelor’s degree at UCLA and a master’s degree at the University of Southern California (USC), both in political science.