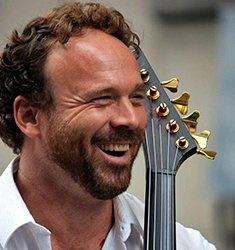 Michael is the recipient of The Prince Charles Award for Musical Excellence conferred by His Royal Highness The Prince of Wales. He has performed for The Pope and the Vice-President of the United States at the Vatican, His Holiness the XIVth Dalai Lama, the late Muhammad Ali, His Majesty King Abdullah II and myriad world leaders over the past thirty years. Hailed by The New York Times as a possessing “Virtuosity, a sense of humour, and an ear for musical dialogue” and by NPR / National Public Radio as “An interpreter of the Muse…,” he performs as soloist around the world, with spotlight performances at the Hollywood Bowl, at the United Nations, UNESCO World Heritage Site Mammoth Cave – the largest cave system in the world – as soloist with The Jerusalem Symphony Orchestra, on the United States Capitol West Lawn, and at the Rock & Roll Hall of Fame.

Michael comes from a family of musicians from Ireland, France, Catalonia, the Ukraine, and Poland – including the legendary Jewish violin-soloist from Poland – Bronislaw Huberman – Founder of The Israel Philharmonic Orchestra. A member of the Aspen Institute’s Global Initiative on Cultural Diplomacy during its tenure and recipient of the prestigious Aspen Music Festival Fellowship, Sir George Martin, Producer of The Beatles, stated:  “Beyond a marvelous talent, I could not agree with Michael Fitzpatrick more: music is the only thing that can change the world.”  Mr. Fitzpatrick is currently spearheading a seismic musical event for our time – EARTH’S CALL – the global-broadcast concert designed to musically change the atmosphere, awaken a climate of compassion, and “tune the planet” in Aspen in September 2017.

“Michael Fitzpatrick has the respect and friendship of Government leaders and members of the Performing Arts community throughout the world.  I find his interest in all endeavors – artistic and intellectual, combined with his enormous talent and enthusiasm used by him to enhance his global commitment to using music to uplift humanity  a source of great encouragement to those of us engaged in reaching out to every race, creed and culture represented at the United Nation. As a close personal friend of Maestro Pablo Casals,  I can think of no more exemplary artist…”