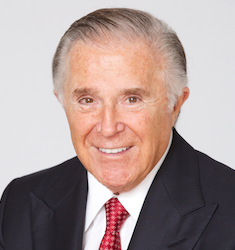 Sidney Kimmel is a modest man from humble beginnings, but he has done extraordinary things.

He made a fortune in the fashion industry, but is most proud of how he has chosen to share his success with others by giving his wealth away. Though his deeds are worthy of attention, he does not crave the spotlight. Once called a “Quiet Giant” of the fashion industry by Women’s Wear Daily, it is a title equally applicable to his philanthropy.

Born in 1928, Sidney Kimmel grew up in Philadelphia during the Great Depression. There can be no doubt that his ambition and drive are products of those hard times, but so is his generous spirit. Mr. Kimmel recalls an example of his parents’ generosity that resonates with him to this day. Sidney’s father, working as a cab driver in the 1930s, received a $50 tip one night. Rather than keep it all for his own family, the elder Mr. Kimmel gave half of his windfall to a fellow cabbie whose need was greater. The lesson was simple yet powerful: No matter your means, you give. You just give.

After two tours of duty in the Army and a brief stint at Temple University, Sidney took his first jobs in the garment business as an inventory clerk then a traveling salesman for a women’s wear manufacturer. By 1959, he had joined Villager as a knitwear designer, rising to the position of president and CEO within a decade. Soon Mr. Kimmel parlayed his instincts for style, design and business into his own clothing line, Jones New York, targeting the young, fashion-conscious career women of the era. The company grew into one of the leading designers and marketers of branded apparel, footwear and accessories in the New York fashion industry and came to include many recognizable brands, among them Nine West, Anne Klein, Stuart Weitzman, Joan & David, Gloria Vanderbilt, Barneys New York and Kurt Geiger. Mr. Kimmel stepped down as Jones’ CEO in 2002, remaining as its Chairman until 2014 when Sycamore Partners bought it for nearly $2.2 billion.
In the 1980s, Sidney discovered another outlet for his creative ambitions, serving as producer of several memorable movies including Blame It on Rio and Nine 1/2 Weeks. Mr. Kimmel now operates a Los Angeles-based production company, Sidney Kimmel Entertainment, that has backed over 40 feature films, including United 93, The Kite Runner, Moneyball, The Lincoln Lawyer, and The Age of Adaline. Click here to see some illustrative examples of those productions.

It was in the years after Mr. Kimmel took Jones New York public in 1991 that he began his philanthropic work in earnest. Since that time, Sidney has given away more than half of his assets to charitable causes, leading his peers by his generous example. And, after his marriage to Caroline in 1999, the Kimmels have pursued their passion for giving, as seen here. The mission of the Sidney Kimmel Foundation embodies a pledge Mr. Kimmel once made to himself: Make progress through these gifts. Empower change. Connect Promise to Progress.